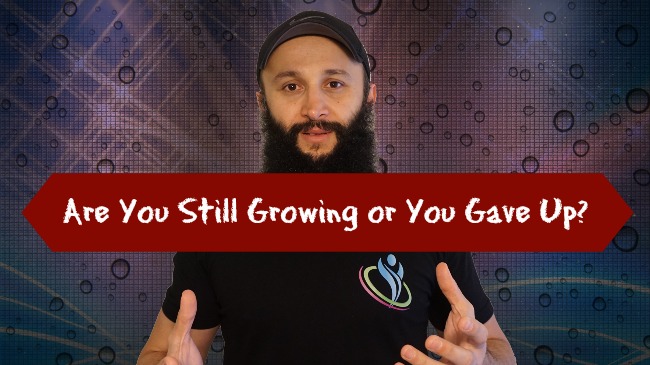 In today’s video, I want to share with you something that bothers me for a long time now.

To emphasize it, I will say a parable that I always tell them that I heard it from my teacher that once a man was in imprisoned for 30 years and when he was sentenced, they told him that your job in prison in your cell there is a wheel attached to the wall, you will be spinning it 8 hours a day for 30 years.

They took him to see what is behind the wall. There was absolutely nothing. Obviously, when he saw there was nothing, he fainted. When they brought him back, they said, what happened to you? Why did you faint? He said, “All this 30 years I was spinning the wheel, I was hoping there was something going on behind that wall. I was thinking that I was manufacturing something that the wall would benefit. Now, I see that for 30 years, it was basically absolutely nothing.”

So in some way a lot of us basically we can bring this to us. We work from our 20s at our, the next 20, 40 years, doing some kind of trade but without any enthusiasm. We just do it. We don’t even know why we are doing it. There is no purpose. We are just trying to make our ends meet, trying to pay the bills, and we don’t even want to consider anything else that will make us grow or actually take us to the next level where life could be much easier and more entertaining.

So what I want to basically do is invite people to actually not give up on themselves because there is always a better way of doing things. It is just you need to get that confidence that we used to have in our 20s and actually bring it back. Forget that idea that there is no more a lot of time left, that I have not the same energy, my health is not this, whatever, don’t hold on to those excuses.

So instead of just following the same pattern and hoping that there is something behind the wall, we should understand that there is absolutely nothing. So don’t stick with the way you are now. If there is an opportunity, start part time, start small, and little by little, you basically grow into it. You will see that you can succeed.

I’ve seen a video recently. I’ve been into calisthenics. So I’ve seen the man at the age of 63. They showed his before and after. He was actually in a wheelchair at 58 when he stared to work out. He is actually at 63 now, 5 years later doing stuff like muscle abs, he is not holding his seat, doing human flank, I have no idea how he got this type of strength but it showed that somebody at 58 wanted something really bad, he started small and the next thing he knows, 5 years later, he is 63 years now, his body is like a much younger men. He is doing things that we now, at I, 30s cannot do.

So anyway, that is the message for today. Never give up on yourself. You have it. Just bring it out. Become aware. Take responsibility. Take action and actually go to the next level.