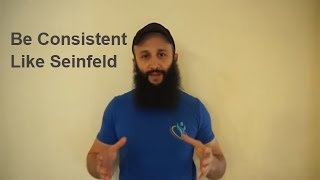 In this video, I want to talk about consistency. What does it take for us to achieve a goal when we don’t have any motivation, when we don’t really have excitement to go forward and be consistent with the task that we assign to ourselves to get to where we need to get?

There was a young comedian. His name is Brad Isaac. On one of the interviews with Lifehacker, he talked about how once he was performing on the same building as Jerry Seinfeld. Everybody knows Seinfeld who is the one of the successful actors, comedians and writers. He’s actually one of the top 100 comedians of all time by Comedy Central.

So how did he get to such a level where he was consistently creating his content and got so good that even think about that part of the show that Seinfeld he was the one of the creators and one of the writers for the show. So extreme success. So this young comedian can Brad Isaac try to figure out what is the secret. And the best stage when he met Jerry Seinfeld he asked him is there any tips for young comedian what can you tell me?

So Jerry Seinfeld shared him something that we could use for our future success. He told him, “You know, you should go to a store, buy yourself one pager calendar that has all the days of the year and also buy a read marker.” Start writing. To become a better comedian, you need to have better jokes and to have better jokes, you need to keep writing. The more you write, the better you’d become.

So he said just start writing and every day goes by or when you did your writing, you put the date x for each day and you go like that one day after another. He said, after few weeks, you will realize that you have a chain of x’s so you’re whole mission will be not to stop and not to break the chain. Just do it until you get to the end and the following year, you do that over and over and over again. So the whole game is not to break the chain. Just write.

And if you notice, he didn’t mention to him anything about getting yourself motivated, stimulating your thoughts, creating some kind of mindset, achieving certain results. All he said was just write and put an x to continue the chain.