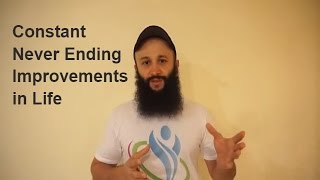 In today’s video, I want to discuss the importance of constant never ending improvements in life. And I want to start with a story, short story.

Somewhere in the village in Europe there lived a wealthy man. He had a daughter. She was getting closer to the age of marriage. And back then, people use to get married that much early age, 13, 14, 15, not like now where we wait until we finish college, get some kind of education and so on.

So this wealthy man didn’t want someone to marry his daughter to some simple farmer or a business owner. He wanted his son in law to be a scholar. So for that, he had to travel to a city. When he arrived in the city, he went to one of the best schools and when he approached the director of school, he said, “Who is the best kid in school?”

And when they showed him this potential husband for his daughter, after discussing bunch of things and examining the person, he realized this kid is brilliant. And, obviously, he proposed him an idea of marrying his daughter and in return, he would take care of all of his bills for the rest of his life.

And he didn’t understand what’s going on. So when he approached his son in law and said, “What happen to you? You were consistent, you were brilliant and now, you’re slacking off.” The response of the son in law was, “Don’t worry father. If you gather everybody in the village together, and combine their wisdom, I will out beat anybody.”

So the wealthy man was not so happy with that response and he said, “You know, I didn’t get you as my son in law to compare yourself to everybody else. I like the drive that you had, the growth that you had, and the expectation is that you would have been consistent with that.

So reading it back to us that a lot of times we get to the level where we say, “You know what? I am better than this person or I am better than this group of people. No, no, no, no. We are where we are and we need to realize that our potential is not somebody else’s potential. So in order for us to get to the next level, we need to maximize all efforts and push ourselves all the time to constantly grow.