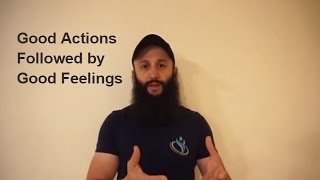 In this video, I to talk about how positive feelings follow positive actions. A lot of us have this mindset where we think that when the environment is supportive, then we would take action. When I feel good, I will do good. Because I feel like it now, I am not going to take action. I am just going to wait and see when the moment is right, when the feeling is right, then I will go forward and do what I need to do.

In reality, it doesn’t work that way. Think about it. Can you expect a fireplace to give you warmth without you throwing some wood inside? Obviously, first, it requires you to take action. Throw wood inside and that fireplace will give you the warmth.

I will give you another story where this point will be even more emphasized. Once couple of people came to this siege where the dilemma. What was the problem? The problem was that they had urge to kill. And they said that at one point, they were good citizens. They did good. They had a normal life and everything. And now, it is completely changed.

So this siege asked them to describe what happened between when they were good citizens and since they got this crazy urge. I forgot to mention that the only reason they don’t kill now is that they are afraid of the law. So to his response, they basically described how it happened. They were good boys which were taken into the army and the army, they were forced to be trained and actually kill and if they don’t kill, they would get killed.

And obviously, they were not comfortable with killing at first, but when they saw the enemy killing their friends and actually going after them, they had to respond and it became a new way of living for them and they just started to kill. The point where each one had their own how they would kill the enemy. And the war was already over and they came back home and they miss it. They want it. So the siege explained to them that what happened is initially they were good citizens then they did certain action.

Action was not necessarily positive and supportive and their heart little by little started to follow those actions. So it said the same thing should be done to undo whatever was created. He suggested them that they should start creating positive actions.