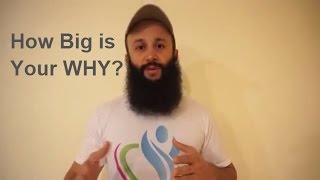 In this video, I want to talk about the power of why. Why do we do what we do. And a lot of times we get into a trap of not having a why and then we just go through motions not necessarily taking proper actions. You always hear people say, I am not really a morning person. It is not really true. If you think about it. When you are excited about something, when you think of something that is important is coming your way you would get up early in the morning. There is a reason that you want to get up early in the morning because you don’t really care or you don’t really have a true reason why you need to wake up.

Example would be, let us say the airport, airplane. You knew that it would be 6 o’clock in the morning at the airport and there is one way, 1 hour to get there so you would make sure that by 5 am you will be there. And together it takes you 1 hour so that means 4 o’clock, you need to, the latest that you get out of the house. So that means you have to wake up at 3. You are not going to oversleep. Probably, you would even wake up many times before that. Why? Because that is so important to you. Obviously, we don’t have that importance every day in our lives and we don’t mind. We just go through the flow. So I want to bring you couple of stories that would also show you and magnify that why.

There was a fight in a boxing match in 1990 in Japan between Buster Douglas and Mike Tyson. Tyson was getting everybody down and in this fight, on the 8th round, Tyson gave an upper cut to Douglas and dropped him down. And before the countdown of 10, Douglas actually got up and continued to fight. Tyson told that set and I got this guy trying to finish him but he couldn’t. Then there was a 9nth round, kind of even Tyson was trying to finish the fight but he couldn’t do it. In the 10th round, Douglas catches Tyson with an upper cut and follows up with the couple of right hands and drops Tyson. Tyson could never recover from that and the fight was stopped.

Later, they asked Douglas what happened, how was, he was the only one prior to the whole history of fights of Tyson who was able to get up and continue to fight, not just survive. He actually won. He said, it is simple. His mother passed away, actually 2 days before the fight. How crazy is that? And his mother was telling everybody that her son will win. So when Douglas was not down he basically had a choice, would he stay down and let it end. His mother, wish that himself or he would get up and still do whatever it takes to win. Obviously, he got up and showed everybody that when you have strong why you will be able to get up from canvas to show everybody that you can pull this off.

Another story that comes to my mind is there was a couple who want to have kids. And eventually, they got an opportunity and they had a child but before they had a child, they were told that his was a high risk pregnancy and they gave the father a choice between his wife and the child. One of them will survive. And obviously he was leaning towards his wife to be survivor. And when he consulted with this wife, she said, don’t you dare to do that. I will never forgive you. Our child will live. So it was. During the labor, the mother didn’t make it and the child was born. It was a boy and this boy was growing up, knowing the story of what really happened to his mother. Father never brought it up and it got to a point where the child was already old enough to go to college. He was not doing so good and when the counsellor called the father and said, you know what, we are thinking to let go of his son, he is not going to make it through this school he said please give me one more chance. Let me talk to him.

So he bought tickets for the, airline tickets for his son and told him that he is going to pick him up from the airport and he wanted to spend some time with his father. So obviously the son agreed and as he arrived, they sat on a car driving quietly. So the son is asking his father, where are we going? He said, hold and wait. They came to a cemetery and obviously located the grave and the father says to his son, I never it would really happen to your mom. What happens is and he tell him the whole story. The son got very emotional and the father says the reason I brought you here and telling you all this is I want you to tell your mother that right now, you are not doing so good at school. And she thought that it was the more important for you to stay alive versus her. So I want you tell your mother that the reason was for him to stay alive was the correct one. Obviously the son broke down and in his mind, his why, suddenly appeared. And his life obviously changed after that. So again, we need to stop and think about where we are going, what is driving us, what is our why…coz when we know what is our why, we can get through anything.