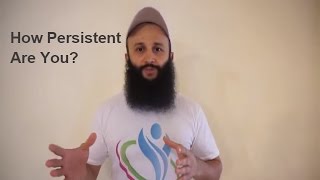 In today’s video, I want to discuss persistence. How important it is in our life to be persistent.

In the last few years, I was taught to always look around me and anything I see try to learn a lesson, which brings to a quote that said, win or learn but never lose. So if we didn’t get what we want, usually there is some kind of lesson is hidden over there. So we just have to be open minded to see the lesson.

I remember when I was a kid, I have seem a movie about a man whose family was kidnapped. And obviously, he got a phone call from the kidnappers and he was told to show up to a certain place. I don’t remember all the details of the movie but I do remember that when he found out that he had to get to a certain destination, he was so determined and try to get there.

But on the way there, he was rushing with his car and had a car accident. And even though it was happening, his focus was, his persistence was so strong that to him it was irrelevant to wait for the police, writing down the insurance information, he just got off the vehicle and started to run, running, running, running, and was coming across a block where a bunch of guys approached them and asked them for money and obviously, he didn’t want to pay attention to them but they started to fight to the point where they beat him up until he was not conscious. As soon as he found conscious, it was like, he was never beat up before, he just got up and just kept on going to his destination.

So imagine if we would have such persistence towards achieving our goals that we set or achieving dreams that we are after.