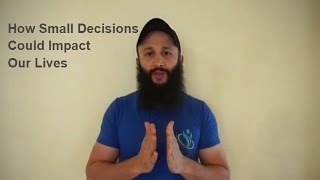 In this video, I want to emphasize how small things, small decisions, could leave a big impression in life. I will bring it to you through a story, which was told by a cab driver in New York City.

He was doing his shift, end of the night, last job, he pulled up to a building, he blow the horn, no one was coming out, he waited for a few minutes, blow again, no response, those went through and he said, maybe I should just drive away, end of the night, too tired to, last job, but something made him actually park the car and go up to a building.

He knocked on the door and he heard a voice of an old lady, “Just a minute.” And something was dark. As the door opened, he sees in front of him, a 90 year old lady with a briefcase, dressed up. He looked behind her and he saw that the whole house, the room was covered, the furniture was covered with sheets and it seems like nobody really lives in this house.

So she asked him for a help with the briefcase and he did, came back to get her, she walked very slowly and he was holding her hand to the car. She thanked him for helping her and he told her that he would do it for anybody because he sees women like her that age like his mother. So she told him he was a good boy and everything so got into a car. She gave him the address where to go.

And he was about to start on his way and she asked him, can you go through downtown please? And he said, that would be a long way. There is a shorter way to get there. She said, I know, but I am not in a hurry. She said that she is 90 year old and her adapter told her that she doesn’t have much time anymore and she is on her way to hospice but before getting there, she wanted to make some stuff.

When he heard that she is on her way to hospice, to spend last moment over there and actually depart from this world, it affected him. So he turned off the meter. He didn’t want to charge her up and they went downtown. She made a stop at a certain building. She mentioned that she used to work her as an elevator operator. She asked him to drive somewhere else. They pulled off by a furniture store. She said that used to be a ballroom there.

She danced with her husband over there. They stopped at a bunch of other places, some places she just kept quiet, was just looking and trying to use her memories and as they did for a couple of hours, she said, you know what? I am really tired now. Maybe you can just take me now to my destination. He agreed and drove her over. As they arrived, couple of people came out to greet them. He went to get the briefcase from the back of the truck.

She was already sitting on a wheelchair and she asked him, how much do I owe you? And he said, don’t worry about it. I am not charging you anything. And she said, but you’ve got to make a living. He said, don’t worry, I have my passengers. I will make a living from there. So she thanked him and somehow he went to reach out to her and gave her a hug, wish her good luck. And, as he did that, she told them, that thank you very much you gave an old lady the best moment of her life. That definitely of course affected him.

They departed. He sat on the car and left. And he was speechless. He didn’t want to see anybody. He went straight home. That whole day he was in his thoughts and this is the moment what I try to bring out why this story also affected me that besides being emotional and everything, that he was thinking to himself, what if it would be somebody else? What if it would be somebody who is not patient enough and actually would get angry and actually drive her away and not make an effort to go in and help the lady to the car? And the decision to that may charge her money and not really give her that treatment that he gave. So he realized that how small things in life could bring greatest pleasure in life, an impact. He was very touched by that and affected by this moment.

So the lesson for us is never get carried away after chasing big things like going to vacation, game or show, and even making impact, not always chase big things. A lot of times in small thing we will find much bigger pleasure and actually do not underestimate what we do to others when we do something that we think is insignificant.