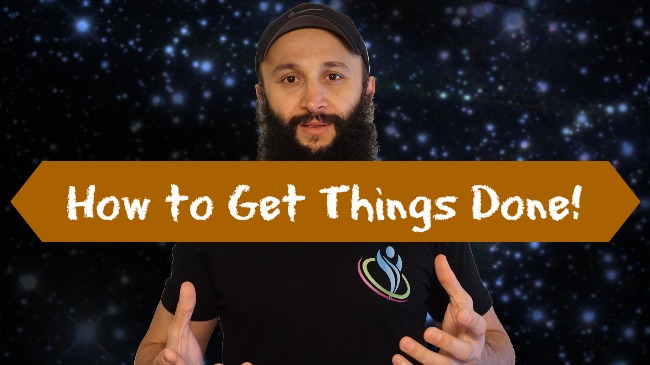 In this video, I want to share with you how to get stuff done.

I came across a book written by Mark Silverman. He’s a coach. In no way, I’m associated with him or affiliated with him to make money on that book or what not. I just wanted to share with you what that book actually did for me.

I read it a few weeks ago and last couple of weeks, I’m following what I learned in that book and it’s amazing what you can get accomplished by going through that book. It’s a small book, short-read, maybe three hours or so it took me, and English is my second language. So if you would to go through this book and apply what you learn, it’s amazing. I’ll give you an overview and example that I read from there that actually touched me.

So after the employee marked the 5, Warren Buffett asked them’ “What about the rest of the twenty? When are you planning to give time to those? And the employee answered that, “You know what? We now have free time from those five ultimate goals that I want to achieve this year, I’m going to focus on the rest of the 20.”

Warren Buffett said, “No. You actually going to avoid those twenty as poison.” At first, it’s kind of confusing but then it all came clear. It’s amazing about the concept. What happens is we all have major goals that we are after, but then all the small things that we also want to get done come on the way and then we get carried away with those.

Not talking about the distractions but tasks seem like they are also important and something we want to do and something that we want to have in our life. So basically, what he did on that book, his strategy is actually, it’s called “Only 10s.” That’s the name of the book by Mark Silverman.

He actually broke his task into interesting system. I actually use Excel spreadsheet to use it and here’s what I did by his recommendation. I have Excel spreadsheet with multiple worksheets. First worksheet is called radar. Basically, I had all the items there that are on the radar, something that I want to do, something that I scheduled not necessarily today, not necessarily this week or this month.

It’s just something that’s occupying my mind. We don’t want to keep anything inside our mind. We want to write it down and put it aside. Then, the second worksheet is called “Week”. On this worksheet, I had all the items from the radar and maybe not necessarily from the radar. Anything that is extremely important to me. He calls it only 10s.

So from the level 1 to 10 how important it is for you to get it done this week. So you make that list, brainstorm. Once you do that, then you would take whatever on your weekly worksheet. You would place it into all other worksheets that I have for Sunday, Monday, Tuesday, and Wednesday until Saturday. So for each day of the week, I have a worksheet. And I put all those items inside of those worksheets.

As I get them done, I mark them as green color and I would do the same the week and the same under the radar. If it’s incomplete task, it requires multiple days, I mark it as red and copy to the following day, so I would continue on that task.

And anything else that comes and tries to distract me from what I’m after, like Warren Buffett said, “Avoid those as poison”. Basically through this book, you follow the system of challenging that new task to prove it to you that it’s extremely important as level 10.

If it’s not level 10, it’s not added to the list at all or it’s added but added to the radar. When you get to it, you get to it. So only focus on things, that number 10 for you and they absolutely must be done. There are more details to it. I really recommend to go through that book, two, three hours; implement what you learn. Your life will change.