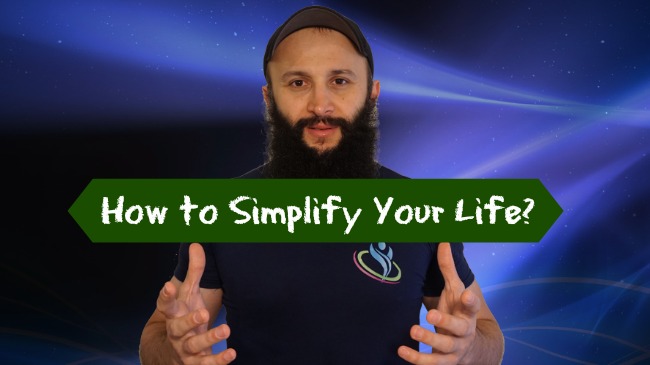 In this video, I want to talk to you about how to simplify your life and what will you get as a benefit for that? And, I will start through a famous experiment that they did with the frog.

In some level in life, we experience similar things. We don’t notice it. If you look at the boiling water as a crisis, when the crisis hits, we’re forced to do something about it. And usually, we snap out of it. But when things start to come to us through our comfort zone, one thing after another, we can find ourselves in a trap.

I’ll give another example where you would see this happen within a day. For example, let’s say we’ll go to the beach. Get some tan. While you’re lying in the sand, you don’t realize that you getting suntan. If you overdo it and later that evening, you come home, you do know that you got burned and you’re forced to put all kind of lotions on yourself and go through some suffering.

So in life, we go through the same thing. Maybe it’s not so visual in one day to see such a change but let’s say, nobody gets fat by eating one piece of cake, right? So over the year, as it makes its impact just like with the frog and just like with the suntan.

So how to get us out of this situation and actually not wait until the crisis would hit for us to do something about it? What I do in my life, I actually implement this and it works very well for me. I do record daily what I did each day. So besides planning each day and each week and actually coming to each working day with intention, I also record every activity.

And at the end of the week, what I do is I review the whole week. What was going on? And I try to find patterns. For example, if I see a pattern that I was watching news too many times a day or visiting social media sites too many times a day, I would actually go in and eliminate such things and never come back to it.

And, if I would see that there’s something that I’m spending too much time on and it’s not worth it for me to do it, I mean it’s worth it, but I can use my time in much better way. For example, if I’m making $100 an hour doing something, and then, I go in and do something else that I could pay someone that they would do it for ten, fifteen dollars an hour, it’s not worth it for me to spend my time. My time is worth much more than that.

At the end of the week, evaluate. What can you eliminate? What can you outsource and delegate? You know there’s a Pareto principle, I think Pareto is the name, 80-20 rule, a lot of people heard of it. I bring this example all the time that they say that if you break your task into multiple steps and two of them would be extremely critical.

So from those two, you would get the 80% of the result because basically you would see like in the business, you would see 80% of profit that they would usually come from 20% of your customers. Some things we can do that so critical they can make a big impact in life, so we should focus on those. The rest of the 80% that give us only 20% of results, we should also eliminate and just focus on those.

To give you one another example that comes to my head about Warren Buffett. He came to a business school and a lot of time in lectures he gives this example. He tells them, “I will show you how to succeed in life and be very successful through my 20 slot rule.”

Basically you get 20 slots to pick 20 stocks and everybody thought that, okay, we’ll pick 20 and then, maybe next month, will choose another 20, and so on. There’s a condition that the 20 stocks that you will choose, those would be for the rest of your life.

So obviously, it forces a person to think twice before choosing a stock. So we can use this 20 slot rule of Warren Buffett in our life. Instead of us jumping to every opportunity out there and try to do everything and get all around again, focus. If you want to do something, make sure that it will make a good impact on your life and make sure that it will not throw you off balance and not take away your time.

Basically, lot of times we do something at the expense of something else. So to keep that balance is extremely important. Hopefully, everybody would give it a try. See that it works.