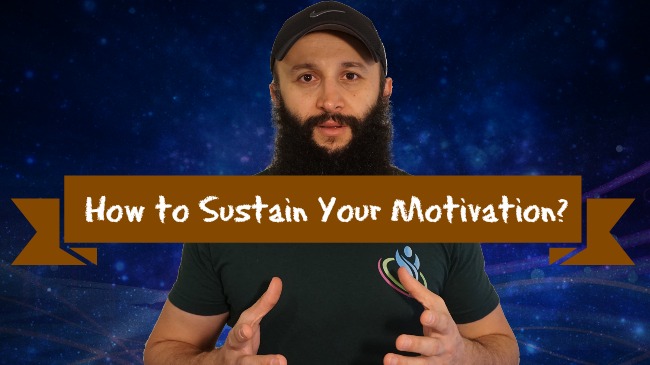 In this video, I want to talk about motivation and why is it we cannot sustain it long enough to acquire the goal or installing your habit?

If you think about it, what’s motivation? Motivation is basically a stimulation of thoughts. Thoughts come through us, through visual or through hearing. We could have seen a motivational video or we read something or actually somebody told us something and we got excited about it. So now, we’re thinking about it.

Obviously, thoughts stimulate our emotions. Emotions created are enthusiasm and desire for us to jump in and actually go after whatever we’re after. Now, unless we take action right away, what’s going to happen is it will be just watching a movie.

For example, I remember years ago, I watched Titanic, a very emotional movie. Guess what happened? I’ve seen almost the whole period was pretty much crying. When later that night, we went to dinner, we were laughing like nothing ever happened. So unless you want your motivation to be like that movie, you would go in and actually take action.

When you would take action, what’s going to happen is you actually will get the ball rolling. As they say that’s something that’s already in motion, it’s easier to push versus something that’s stationary. So once you take action, could be making a list of what needs to be done or making that phone call or setting up an appointment, whatever it is.

For example, let me give you some examples, so it’s easier to relate to. Somebody has issues with health. So instead of pushing it off until it’s a crisis, go and make that phone call because what’s the point when it’s already set, you’re not going to push it off.

If it’s a problem with teeth, connect with your dentist don’t push it off. Don’t wait until it’s actually going to get to the point where there’s pain. Or, if it’s nutrition that you want to follow right away, make a shopping with a list of things that you want to buy. If you decided to go to the gym, actually go there and sign up for it. It takes only one action to get you going.

So, if you do that, there are more chances of you to continue. Now, that’s only to get started with a line of motivation. What happens afterwards, we basically, whether we like it or not, motivation will start to shrink eventually it would be completely gone. So what’s left out for us then is relying on our belief system, which I’m not going to touch yet. We will basically rely on our willpower.

Willpower, just like motivation, also cannot be sustained long-term and as time goes by, it’s actually also shrinking, not just time goes by, as days go by, you have more willpower in the morning versus middle of the day or later that day, right? So that’s why they say the hardest thing out there, you want to do it first thing in the morning because you are full of strength. Not just physically, mentally, emotionally, and so on.

So not to fully rely on willpower which we know also will shrink. It’s used as a fuel. We want to introduce certain things that would actually not basically take the will power out of the picture. It would be a slower process. So number 1 thing that you can do after starting some kind of action, make it convenient.
For example, if it’s not convenient for me to go to the gym, why because I decided to go 5 o’clock at night when it’s a rush hour, I’m setting up myself for failure. My willpower will deteriorate very fast after having this road rage and actually annoyed by traffic, I’m not going to be in the mood for workouts and it will just be another time and I quit.

So instead maybe making it in such a way, maybe before going to work, it’s more convenient to actually do it in the morning. I do it first thing in the morning. 4 o’clock in the morning, I’m up to the gym. Why? Because all I have to fight is I need to get up, get away from that pillow. It’s only basically one excuse versus when I used to go in the evening. I’m tired; there is an event or party that I need to go to. There’s always something on the way that would stop me from going to the gym. So instead of going two, three times a week. Now, actually going six times a week and I take purposely one day week break just let my body recover.

So by making it convenient, where you have less struggles to achieve something, you actually have more chance to succeed. For example, nutrition in the kitchen. It’s very convenient to eat junk food because it’s already made. Get rid of all the junk food. Make it inconvenient for yourself. You’re not going to go to the store just because you want junk food. If you do, it’s not going to happen as often as it would be in your kitchen and a lot of other examples, of course.

Now, the next thing what you can do is to save your willpower. Get somebody involved. For example, a friend or a partner. If I go to the gym, for example, I know somebody’s waiting for me, it could be even a personal trainer. I know he’s expecting me. So, in addition to that, I could be paying money to that person. Same thing could with the coach, accountability partner. We are paying them.

In addition to that, they expect us to show up. So for us not to let somebody down, guess what? We would let ourselves down but not somebody else. So not to let somebody else down, we would actually show up and not rely on that willpower. So there’s more chances for us to actually get through until something that we found out never knew would become aware of it and actually do it and do it to the point where it becomes a habit and eventually is not in the habit, it’s your second nature.

You don’t even have to think twice. So I think those are a few good examples. My favorite one, of course, is getting yourself an accountability partner. Somebody who could mentor you, teach you, or consult you. It could be a little expensive but guess what? Because it is the way it is, you would commit yourself more and you would actually succeed much faster. Because self-love is crazy. We always give excuses that I don’t have time, I didn’t make it, and so on, I’ll do it next time and we’ll keep on procrastinating.

A lot of times I had this issue and thank God, I realized that I needed a coach, so I have a couple of coaches now that actually pushing me through whatever I need to get. Another thing that would also help that I almost forgot about it, it’s extremely important. Obviously, you heard self motivation is the best motivation. So just rely on external motivation and willpower and your belief system, you can actually go on self motivate. How?