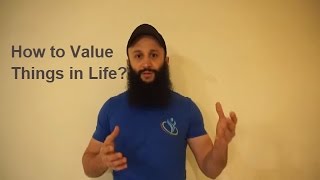 Today, I want to share with you something that got stuck in my head since my childhood.

A lot of you know that I was born and raised in the former USSR. Once on TV, they had a show, and on that show, they showed a family of husband and wife and a son. One day, father decided to teach his son to appreciate things in life, so he wanted him to go to work and actually earn his own money. Mother, obviously, felt sorry for her son because he was kind of lazy and the only son, you know. So secretly she was giving him money to show to father that, “Look Father, I made some money today.”

Obviously, father was very wise. Every time the son would show up showing money, he would take this money and throw it into the fire, and he would say, “You know what, son? You didn’t earn this money,” and son would just smile and walk away. And that was happening for few weeks, and finally, mother realized that that’s not going to fly anymore, so she told her son, “You know what, you actually have to go and make your own living because you cannot by pass your father.”

So that day came, he finally earned his own money, toiled. When he got back to his father, tells his father, “Father, look. Look. I made my own money. Here it is.” Father takes the money and throws it into the fire again and, obviously, he said it again, “You didn’t earn this money.” When his son heard that, he jumped. He was willing to get hurt. He was trying to pull the money out of the fire. And the father said, “I’m sorry, son. Now I see that this money was actually you worked for.”

So that somehow stuck in my head, and now that I’m older, I can appreciate what I saw back then much more on a deeper level, obviously.

So the same thing could be applied with parenting, with marriage, with career, friends, relatives, and so on. So we just need to sit down one day and evaluate: Where am I? What do I care about? What can I do to care about it a little more?