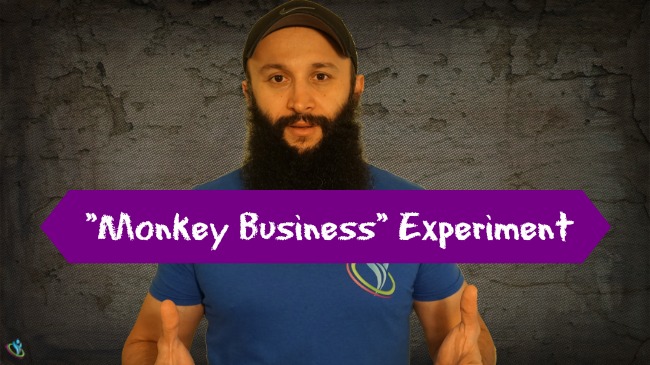 In today’s video, I want to talk to you about the experiment that was made on monkeys, kind of cruel but does pass a message.

They took 6 monkeys. They placed them in a cage. The cage had to food, whatsoever. They placed in a middle of it a ladder. On top, they hang bananas. Above the bananas, there was a hoe with high pressure water. After some time, the monkeys realize that there’s bananas at the top and the way to get it is through the ladder.

So one of the bravest monkeys decided to go up. As it climb up and about to grab the bananas, the scientists opened the flow of water and drenched all of the monkeys. The one that was on top fell flat on the floor. All of them were shocked, scared, didn’t know how long that would happen. So, as the water stopped, the monkeys stopped worrying.

And, a few minutes later, another monkey decided to go up and attempt the same, try to get the banana. As it climbs up, the high pressure water again pushes the monkey down and at the same time, the rest of the monkeys were under the same stream, totally scared, not moving, scared to death, and not happy about it.

Now, a few minutes later, the 3rd monkey decides to make an attempt and as he was about to go up, the rest of the monkeys jumped at and didn’t let it go up. And from that moment, none of the monkeys attempted to go up. The following day, the bananas was still there. What the scientists did is they pulled out one monkey and replaced it with a monkey that did not see what happened. Obviously, it realizes that there are bananas at the top and tries to climb up. Guess what happened?

So what is amazing, fascinating was that, look at this experiment. In some way, we are those monkeys. How many things in life that we have this gut feeling that we want to go up in life and actually challenge ourselves and succeed in something but because of what other people do, when they try to stop us, whether through conversations, through some modern methods that they basically create this fear in us that we don’t even attempt to go up there.

How do we know if the following that days scientist would actually allow the monkeys to get the bananas, but because they were all terrified, that was actually never happening. So obviously, we do need to be careful and we don’t need to learn from history, from all the things that happened, that obviously we do this into the teachers that pass down the information on what to do or what not to do.

But if we have something that is kind of right. We believe it’s right and we believe we can pull this off, we should not be discouraged and actually have a try and if we don’t totally start the process, start with something small. Make a small attempt, small action, see the results. Once you see the results, take bigger action and bigger action and the next thing you know, you totally dominated whatever you are after.