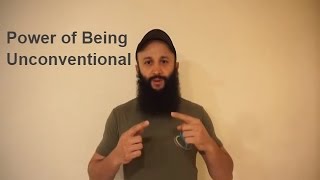 In today’s video, I want to discuss the topic of the power of being unconventional.

Did you know that in 1968 Olympic games in Mexico City, there was an athlete by the name of Richard Douglas Fosbury? He was a high jumper. He actually won a gold medal, and he didn’t do it the traditional way. Meaning, all the high jumpers when they used to run towards the bar, they would face the bar to go over it. Fosbury, what he did at the last moment, he actually turns his back towards the bar, arches his back and goes over the bar backwards. His method was questioned by coaches and judges, but they did give him a gold medal because he actually beat the world record by doing it that way. And eventually, by 1980, 13 out of 16 athletes would use his method, and it eventually actually became a standard way of jumping over the bar.

Now, how did he do it? He did that when he was actually 20, 21 years old and he discovered this method at 16 in his high school. His high school was actually one of the first schools that introduced foam in the landing pit. They used to use wooden chips like mulch and sawdust and, obviously, the pit, the landing ground, was not as soft, so everybody was going traditional way, facing down. So when his high school introduced foam, he actually decided to try to go with his back and succeeded and did much better. So he worked on this method for 4, 5 years and eventually won a gold medal.

Now, what can we learn from this? Personally, I found it very amazing and fascinating because I can relate it to me. I’m not saying that we’re discovering something new in life that nobody ever did. I’ll give you an example. When I was single, I did certain things that I was not able to do when I got married. For example, you can’t get married and say, “You know what? I’m still going to go out with my friends until 2, 3 in the morning.” So now you have responsibilities. You have a spouse. Lifestyle changes and you need to adapt. Your environment changes, you change too.

Now, once you got married, you have kids. You cannot do things the same way as when you were just happily married couple. Now you’re a happily married couple with a kid. So you can’t just say, “You know what? I’m still going to my movies,” or, “I’m going to my lounges.” Somebody needs to handle a child. When you have multiple kids I have six kids now, so there’s things that I cannot just go and do because I do have my responsibilities as a parent.

So the idea behind it is whatever changes come to our life, whether we plan it or don’t plan it, our mission is to adapt and don’t just do things conventional way as you used to. Sometimes you need to become creative and come up with something new. We’re not talking about creating something new that never was done before. Something new for us in our life right now.