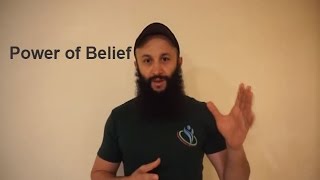 In today’s video, I want to discuss a topic, the power of belief.

Recently, some time in September, there was an auction. They auctioned shoes, athletic shoes, and those shoes were sold for over $400,000. What’s the history behind those shoes, and who did they belong to?

Well, those shoes belonged to Roger Bannister, the British Olympic runner and also physician. He was the guy who broke the record in May 1954, the four minute mile barrier that no one could really break. There was another runner from Australia, John Landy. He tried to break the record for two years from 1952 to 1954, and the best he could do was four minutes and two seconds. He was constantly saying that breaking through four minutes was like a brick wall that he could never do it.

It’s also fascinating to think about it. We go to the gym few months, a year, trying to achieve certain results. This guy was running for years, trying to break the record, and he could not get by, to the point where he was almost giving up on the idea.

So at the same time, in 1954, Roger Bannister came out and said, “You know what, I have to do it. I have to break it.” Also, if you read the details, it’s amazing how many things have to be in place for that to happen. We’re talking about the weather, the wind, the shoes, the conditioning, and so on.

So when Roger Bannister broke the record, what’s amazing is John Landy broke the record after 45 or 50 days from the time that Roger Bannister did it. So what changed? I thought it was a brick wall that he couldn’t break, and he actually did it. And since that was done, four minute mile became a standard. Up until now, I heard there was over 20,000 people who broke that record. You cannot even qualify for the Olympic games unless you run four minute mile.

In 1964, there was a first high school kid in the U.S. that broke that record, and right now, I believe someone from Morocco in 1999 broke the record to the point where it’s at three minutes and 43 seconds.

So something that at one point was believed that it’s not possible actually became possible, and not just possible, it became a standard.

So any of us that think that we cannot make it or it’s too hard and so on, I believe this is very empowering and inspiring story. What power of belief can do to us, that anything becomes possible. There’s no such thing as limitations unless we set them ourselves in our heads.