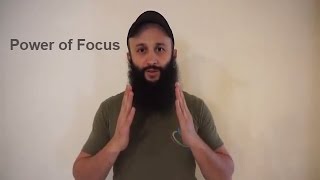 In this video, I want to emphasize the power of focus, and I’ll bring it to you through a story.

Once, in jail in Siberia, Russia, there were two inmates. One of them was a businessman, ex businessman, and the other one was ex circus performer. He was a tightrope walker. They always had discussions, and a lot of times the circus performer used to mention how good he was walking the tightrope, and the businessman could not believe it. He believed him, but at the same time, he was questioning him, saying, “Why would anybody without any safety net or cables for the security risk their lives and walk from building to building?” But the tightrope walker was trying to emphasize how easy it was for him, that he acquired the skill after so much practice and everything.

So this day comes and in prison, for some reason, there was a holiday, they allowed every man to show their gifts, and that was the opportunity for the circus performer to show this businessman that he’s able to pull this off. So they did set the rope from one building to another. And there it was. The tightrope walker goes from one end to another, turns around, and goes the other way, does some stunts while he was on the rope. Obviously, everybody was impressed.

As he finished and came down, he basically looked for that businessman and asked him, “So, so did you see? Did you see how I performed?” And the businessman said, “Yes. I’m really impressed. It’s amazing.”

So, the circus performer asked the businessman now, “Tell me, what do you think I had to do in order to get from point A to point B? Was it thanks to the skills of my hands to keep balance? Was it my feet, or what was it?” So the businessman tried to replay the whole scene in his mind and said, “You know what? I believe it’s your eyes. Your eyes were so focused on that pole on the other side. You would not take your eyes off.” The circus performer says, “Wow. Amazing. You’re right, absolutely right, because that’s the only way you can get from point A to point B. You must really focus, and your feet will bring you where they need to go.”

So then, this circus performer asked him the second question, and he asked, “Tell me, what’s the hardest thing to do?” The businessman replayed again in his mind, thought about it, and he said, “You know what? I think turning around is the hardest point.” The circus performer was excited and said, “Yes, you’re absolutely right again. The hardest thing is to turn around. Why? Because for that split second, you remove your focus from that pole, and you’re trying to turn around. Until your eyes get focused on that second pole, there’s an opportunity to fall down and actually get hurt and actually die.”

So he also emphasized that if you don’t panic and you actually make the turn, your eyes will eventually find that pole, and if you regain your focus you will get your balance again, and you’ll be able to proceed the rest of the way.

I found this story extremely powerful and educational, and you could apply it in our life. As long as we know what we want in life and pursue the goal and stay focused and don’t deviate, it’s easy for us to keep the balance and actually acquire it. But for some reason obviously, we have entertainment, we have social media sites, we have e mails, we have friends, all kinds of things around us that constantly try to distract us. And at that moment, we might lose the focus and, obviously, could possibly fall and never get to the goal that we tried to acquire.