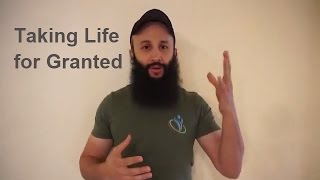 In this video, I want to share with you a parable and then show how it relates to us today.
Once there was a King and this King used to love to hunt. In one of these trips he gets lost. While trying to find his way out, he finds himself on top of the hill. He looks around and realizes how beautiful and gorgeous the place is. So he said to himself, “You know what, in this place I will build a hotel with a beautiful garden.” Anybody who would pass by would enjoy their time here and actually praise the King.
So it was.
Eventually he found his way back to the palace. He hires a manager, gives them money, gives him a team and says, “Go to such a location, I want you to build the hotel with a beautiful garden and let all the travelers enjoy their time and praise my name.”
The manager head out and does what he does.
Many, many years later, the King goes to hunt again and he sees a familiar place and says to his crew, “You know what – somewhere around here I ordered that there would be a hotel build with beautiful garden. Let’s spend the rest of the time there.” So as they were coming closer to the hotel, they see that the garden is actually neglected. They see a lot of weeds, King is not too excited anymore. He comes closer to a building, and he sees some of the windows are broken. It’s not clean; he gets even more upset as he enters the front door. He sees that some of the chairs on the floor. He sees dust, he sees spider webs. He is furious.
He gets to the front desk, rings the bell, and I don’t know where this manager shows up, totally drunk. And as he sees the King, he has mixed emotions, he doesn’t know if he should laugh or cry. And he says to King, “King, if you would please give me notice, I would clean up this place.”
Now, obviously we can figure what the response of the King was. Let’s bring it back to us today, how it applies to us.
The manager is us – people. The garden is this world and the palace is actually our life. The King – you can call God, universe, your higher self, your conscious. Basically, we were all given opportunity to build out our life, be a good example to others, enjoy the goodness of this world, and make this a better place for everyone.
As we started, we started good, and little by little, we started to neglect, we started to take things for granted. We stopped growing, we don’t appreciate things anymore and ultimately, we got to the point where most of us just exist instead of living.
Sooner or later, it catches up with us. And eventually, when the crisis hits, we would have to face the truth, and face the king, face your higher self, face your consciousness – and actually give accounting for what’s going on.
If you think back and ask yourself –
Did I achieve what I wanted to achieve in life?
How many things in my life right now I’m taking for granted?
How many things have dust in it?
How many things ARE covered with spider webs?
What’s broken? What can be rearranged and redone and actually brought back to life?