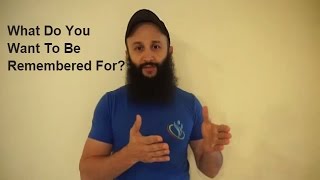 In this video, I want to share with you something that I never knew before but have heard of it. I mean everybody heard of Nobel prizes, but I never knew how it came into existence. And when I found out the story recently, I was kind of shocked, and that story actually speaks to me. Therefore, I wanted to share.

It was named after a name called Alfred, Alfred Nobel. He lived in the 19th century in Sweden. He was a big guy, meaning, he was the creator of dynamite. And you think that it had to do with explosive devices, he was the originator of those.

It happened to be that his brother passed away. A newspaper made a mistake – they thought that Alfred passed away. So they created a page dedicated to Alfred Nobel, his obituary. So he was one of those guys that got an opportunity to read his own obituary while he was alive.

And what he saw completely shocked him. What did he see? He saw the headline, it said, “The Merchant of Death is dead.” That blew him away, and as he continued to read, he realized two things. One is how people perceive him, what they going to remember him as. They will be remembering him as creator of death, as the person created the ability to kill a lot of people at once.

And number two, he realized that he didn’t want to be remembered by that. Shortly after, he created an award – Nobel prize. To anyone who would bring benefit to this world – whether it’s in literature, science, medicine, math, and so on, you name it.

Amazing now, think about it. He reads about it, it shocks him and therefore, he takes measure. Measures to create something so fabulous.

How many things in our life we do and don’t even realize, do we really want to do that? Because people remember us by our actions, by our creations.

It inspired me a lot. It really pushes me to evaluate everything to do in life and I want to make sure that I will be remembered in a right way. Personally, I want to be remembered as a person who motivated and inspired and actually took action.