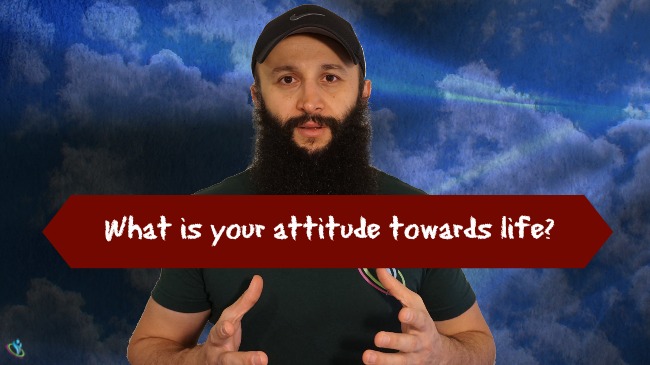 In this video, I want to talk about attitude. And again, I will bring it to you through a parable story, actually that was a story.

Once, a teacher, was sharing something with his son. He said, “Son, today, I have a visit from two of my students. The first one told me that his applying all of my teachings that I gave them. And he is so successful in life. He starts his day early in the morning. He grinds. He does everything. Everything is he should. And he is so involved with was he is doing, basically growing himself helping others and contributing on all the levels. He finishes his day around midnight. And around midnight, he has finally an opportunity to have a cup of coffee, cup of tea and actually relax.

And the second student tells me that he is a farmer. He is working all day in the farm, has no time really to learn any of my teachings, struggles all day since this morning until evening and finally at night, when is so tired and he has a free moment, he opens up my books and tries to learn all of my teachings. So he is asking his students who you think is right. Which attitude, which student is greater.

As the outcome, the teacher revealed to his son that actually the second student was right. Basically, as Jim Rohn said that direction determines destination. It is not about where we are. The first student was already successful and he was doing everything as an obligation. This is what I do. And finally, when I am free, and I am done with everything. I just want to relax. So his attitude is actually not a winning attitude. He is not looking to actually grow and become more. His attitude is you know what, let me just do what I got to do and then, I am going to go and be on my own.

The second student was actually a farmer. Even though he was not there yet where he was supposed to be, but after hard work, even though he was so tired when he finally had a moment to cool off and dedicate some time towards something, he chose to apply towards learning and reading the books of his teacher. So why am I telling you this story?

Instead, make an effort. Learn because we get not what we want. We get what we are. We get what we deserve. And what we are is the value that we put in ourselves and we should never grow just like everything else in this world. Look at plants. Look at animals. Look at anything. Everything grows. If it doesn’t grow, it dies. As my teacher said that, imagine yourself walking in an escalator that goes down. You are actually walking up. If you stop for a moment, you are already going down. So we should never let any moment pass without us actually learning and growing.