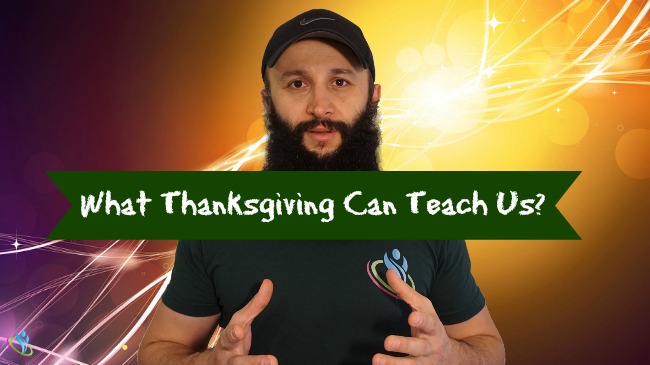 In this video, I wanted to wish everyone Happy Thanksgiving Day, wish everybody the best they can be, the best of everything that they could have. At the same time, I wanted to share a couple of lessons that would hit home especially for this holiday.

You know, a lot of people celebrate Thanksgiving, but never really think about this day. To a lot of people, that’s how I used to be personally – this was just a reason to get together. For a family to sit the same table, to reunite with some friends and express gratitude. But do we really express gratitude? Now it’s not just once year, that’s number one, it should be on a daily basis. We should be thankful because I strongly believe that gratitude is one of the key ingredients for happiness. If were not grateful for things that we have, it’s never enough, it’s a constant rat race – what’s the point?

So if he would come from that angle and think about that, he has only 20 times and there’s a countdown, how many times he can go he can actually count on his fingers, he would have a totally different experience. He would cherish it. He would try to have the best experience as possible. Unfortunately, we don’t do that with our daily life because we that believe we’re going to live forever. Nobody really thinks this “Oh, could be my last day, who said I’m going to wake up tomorrow?” So if we could come from the angle that today is the last day we would live our life totally different. When somebody gets diagnosed with something and they were told that they have another 30 to go or 60 days to go, they don’t live like you and I. Just whatever, right? They actually evaluate every single day, they put closure to a lot of things. They try to get things as much as possible and spend time with the people that they cherish the most.

So that’s one perspective, so we should really look at things as we have limited amount of time to experience it. So then we would be more grateful that we would be experiencing it, we would really cherish it.

Number two, is another perspective. It’s actually a word, one word, a change of one word in a sentence totally changes the whole sentence and changes your perspective and would make you come from the side of gratitude.

For example, somebody has to wake up 6:00 in the morning to go to work. I have to wake up 6 in the morning (ugh), I have to be in traffic (ugh), I have to deal with my co-workers(ugh). So people dwell too much on have to, have to, have to. I used to do the same thing, I used to say you know, I can’t do this right now have to go and be with my kids. So that word is not as empowering. If you would replace with “have to” with “get to.” Instead of “have”, say “get.” So it changes the whole sentence – I get to get up at 6 in the morning, I get to spend time with my kids, I get to be with co-workers. Now you actually going with a totally different perspective with enthusiasm into that experience. It can really affect how what kind of attitude we would have; how much emotions would be loaded into whatever we’re doing.

So this is it. Those are the 2 lessons for thanksgiving. We should have thanksgiving daily. Just have a time block, be thankful for things and from there you would blossom.