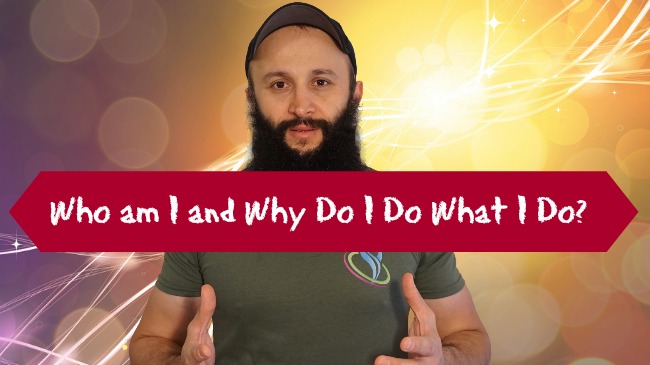 In this video, I wanted to talk about me. Why? Coz recently somebody asked me we see bunch of readers of you online and we have no idea who you are. Why do you have a beard? Why do you dress casually? Why you do what you do and so on.

So I was inspired to actually make this video. To start, I was actually born in the former USSR. I was raised there until I was 16. At 16, I moved to New York City, USA. It was a dream come true. Obviously, when I was 16 and I came to US, I was totally disappointed and wanted to go back. Dream come true. I actually arrived in summer and it was extremely hot and that was not I was used to. And I had no friends. I had to start all over.

And I am going to a private school for couple of years. There, obviously, because it was a private school and all of the kids were Russians, we actually taught our teacher how to speak Russian, instead of them teaching us how to speak English. So 2 years later, I am 18 years old, I decided to go to college with zero English. And I started also to work at the same time. It was 2 years with no language.

My first job was at the (inaudible 1:24) ice cream store. People were just pointing what they wanted and I actually had my friend translating what they wanted and I was serving that way. Anyway, so I picked up some English. 3 semesters later, working 2 jobs now, coffee shop and ice cream shop, I quit college. It was not for me. Why? Because, I was under peer pressure, friends, cars, going out, one thing after another, I decided to go and pursue money.

And working so hard, day and night, I actually got sick after working for the whole summer. And I end up quitting one of the jobs. Then, obviously, at that time, my mentality was what can I do, what can I invest extremely small and dedicate as little time as possible to get as much as possible. And back then, I was very interested in computer games. And I wanted to program. And that is how I started.

I went into programming school for 3 months. There, I actually learned some of the programming skills, didn’t know much but luckily from the first interview, I got a job. I got a job. I end up quitting in the ice cream store and started to work as a programmer. My first site that I actually work on was for the White House historical association. We actually had a trip to White House. They showed us these rooms. Basically, first job.

4 years after being in the United States, and visit the White House, all this treatment obviously was exciting. Then the whole, that can come boom the technology, was basically, people were throwing money left and right just to build a site. And that is what I was good at back then. One thing after another, I stopped working full time, I was working only on a consulting basis, flying from state to state with different projects.

Actually, I got to the point where there was extremely good. People valued what I did. But I was not so happy. I was making monkey. I wanted more. So eventually I started to look for ways to make more money. And programming actually, it is a nice job. The pay is being increased so good and so fast. But there is a limit on how much you can actually quote and how much you can do. You cannot go beyond that.
So I already got married. I already had kids. And I decided not to raise my kids in New York. We moved to Florida. In Florida, we wanted to start a business. I opened a furniture store. I wanted a consistent income thought I would open one store after another and especially back then there was a real estate boom, everybody was buying houses. Those houses needed to be furnished. It makes sense. So we did good for one year, half a year. Then the whole thing just went collapsed and everything just died because of the real estate crush.

So I end up programming to make money to support the furniture business until I actually closed it down. I realized that that was not for me. So I wanted to find an income where I would not get myself involved too much and I came across affiliate marketing, pay per click marketing. I went into that, loss some money, eventually I figured out how to make money online using pay per click. And I used that to support me.

And obviously, we had to downgrade, downsize, get rid of the house, get rid of cars, I had 3 kids in no cars for couple of years, all the time I was learning marketing. Let some people down, lost money, filed bankruptcy, ruined my credit, ruined people’s credit. My mother in law she helped me a lot. But one after another, I don’t know how I end up there. All I said I was very sorry and life goes on. We tried to rebuild.

Ultimately, I started to make money online, doing pay per click marketing. And at the same time, I started to get involved with projects where I could get commissions, residual income or some kind of partnerships in a project that I would be involved. And this is the only thing I was interested and why? Because by then I already had 5 kids and there was actually no time to seat and program. So I end up being involved in bunch of projects with my partners who are actually now my very close friends. We are actually like a family involved in so many years and same projects and these projects are not just small size those are like enterprise projects.

We sold some of them, very profitable, learned a lot, so here I am actually now trying to go to the next level especially now after volunteering in prison, local state prison, high security prison here. We basically influence a lot of inmates and the group actually grew to from 6 people to 25, 30 people and we’ve seen the progress there and I started to hear from everywhere why don’t you share this knowledge that you do there.

And there we basically use a lot of metaphors, stories, actually how I grew the beard, actually became, I went back to my roots. I am a Jew. I went back to Judaism. I started to be absorbed in Orthodox Jew and that is how I got the beard and we live in a nice community, beautiful community where everybody cares for each other and we actually grew into where we are now.

So now, we are actually at the point where we got enough. So now we want to share. And that is how I actually started making videos online and actually started to post motivational quotes. Basically, I share everything that made an impact on me and now I am at the point where I want to do coaching part-time, actually obviously coaching is not for everybody. It is for any person that actually decided, I want to go to the next level. What am I lacking? I am lacking awareness and this is where we come in as a coach, actually explain that awareness, make you aware because once you are aware, you will feel responsibility to actually go in and take action and actually transform your life just the way I did it.

So in a nutshell, that is my lifestyle. Here I am today. I have 6 beautiful kids, living in a nice community. Life goes on and from here forth, I will be sharing what I learned.