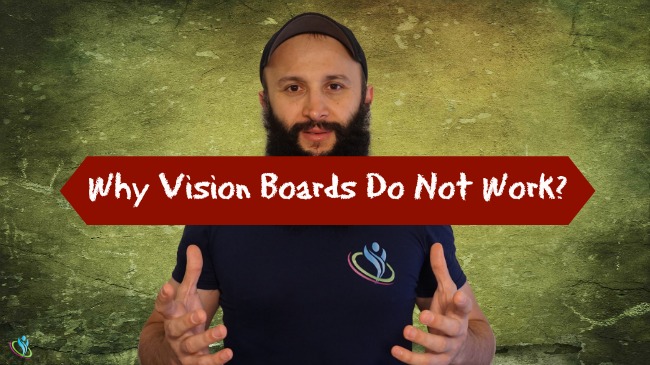 But before that, those who is not sure what a know what a vision board is, anybody who’s going through personal development or self-help, they touch on that subject of vision, where they’re going. So vision board helps us with the vision, we visualize. We do not think in letters – pictures is what we use in our mind to visualize things. If I tell you ‘elephant’, you don’t visualize letters e-l and so on, you actually visualize in your mind a picture of an elephant.

So on the board, we placed bunch of pictures, different aspects of life. It could be something that we want to acquire, let’s say, it would be a house, or a car, a boat, or something that we want to achieve. It could be muscle up, bench pressing 300 pounds. So you would put those pictures on the board and visualize and remind yourself where you’re going.

So, why a lot of people cannot achieve those? You know, everybody heard about THE SECRET, the movie, or actually read the book, and heard the concepts there about positive thinking and law of attraction. Same idea, kind of. It also in some way works and doesn’t work unless certain things done with those. For example, I can’t just think and desire something, even though I think positive and I desire it and I’m asking God, universe, whatever you want to call it, “Give it to me, I’m ready.” No matter how much I desire it or want it or think positively about it, I’m not going to be able to attract it.

Even though it could be attracted, but I’m not going to get my hands on it. Why? Because my actions are not either not taken or contradict to receive it. What do I mean? For example, let’s say, somebody placed on the vision board a Lamborghini, fancy car. Now, picture how a person would treat that car? They would probably take it to car wash all the time. They would make sure nothing in the car is not functioning. They would make sure that it works like a clock. They would make sure that it’s not a lunch room right, because a lot of times families with kids like mine, car could easily turn into a lunch room. Everybody has a snack, a few times, next thing you know, there’s empty bottles, there is all kind of things in the car.

So if I treat my current car, and let’s say I have a used car, that doesn’t cost as much as Lamborghini, but my attitude is not like towards the Lamborghini. I don’t treat it the same way, certain things that don’t work I don’t care, I neglect. The car is messy. I don’t take it to car wash, so that action is a contradiction of having Lamborghini. So even if Lamborghini comes my way, not happening. Basically, what are they saying? They say, “Luck is when opportunity meets preparation.” So everybody gets opportunities, but because we’re not prepared, we’re not able to retain or acquire it. We could almost touch it, but were not getting it.

So just like I said that with the car, apply it everywhere else. If somebody wants to bench press 300 pounds but their lifestyle, their eating habits, sleep patterns and you know, person hates the gym – how in the world you going to get to the point that you would bench 300 pounds?

But if somebody who wants to influence his kids but he puts zero time into reading about parenting, or learning about parenting – how you going to, just based on your instincts? Impact your kids? Not happening.
So you can desire and want and think positive all you want. It’s not happening. You can put it on your vision board, you can look at it all day long –not happening. So first, is take action and then when you take action actually does not contradict you having this thing.

You know, they say, “Fake it until you make it.” While you’re ‘faking it,’ you’re actually ‘making it.’ You’re faking with the action that would you pretending like you really got it, so your actions do not contradict you faking it.