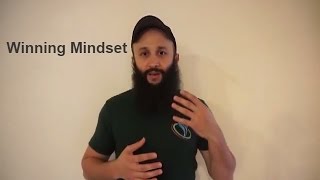 In this video, I want to talk about mindset, winning mindset.

Story is about the sage who used to love to learn every single night and goes to sleep only after he’s so tired and he’s not able to continue. One of those nights, as he went to bed to sleep, he had a crazy urge. He had an urge to sniff some snuff. Snuff is also known as tobacco. Obviously, he tried to fight the urge. He said to himself, “I’m not going to fall for this temptation. I’m strong enough to just go to bed, go straight to sleep.”

As he thought to himself that, another thought came to his head and said, “You know what? You’re not really strong. You’re not really overcoming your urge right now. You’re just lazy. You don’t want to get up and walk all the way to the study room to sniff some of that tobacco.”

So how do you think he resolved this issue? He actually got up, went to that study room, took the tobacco, looked at it, placed it back without sniffing it, went back to bed, and fell asleep.

I find this story amazing and it actually caught my attention. A lot of times we have all kinds of conflicts in our heads and trying to resolve. We, a lot of times, worry what other people think, or even ourselves, what we think of ourselves. And we make a lot of decisions without truly analyzing it and actually finding a true solution that would be totally fulfilling and satisfying.